Donna McClish-Calimee is making things work. She’s raising three of her grandchildren and one of her great-grandchildren as a single parent. She’s also unable to work after a car accident left her with a spine injury, and supports her aging mother in her free time.

“It has been challenging. It has its days. It has its moments. But with the grace of God I’ve been able to survive and make it,” McClish-Calimee, 58, said inside her north Sacramento home.

Even with fans blasting across her living room, it’s hot, but her grandchildren pile in anyway. They fill the room — goading each other and laughing the way families do. Three of the girls, the oldest age 17 and the younger twins at age 14, dote on Jaylen, who just turned 7.

Money is tight on a good day, but especially now that rising costs are eating into budgets. McClish-Calimee relies on her church family and local organizations like the Roberts Family Development Center to help make up the difference when the money just won’t cover everything.

One might expect, then, that getting the family through the pandemic was nearly impossible, but actually, things got easier.

“They did give us pandemic food stamps, which helped, and then with my Social Security I have my little pandemic money as well,” McClish-Calimee said.

She became eligible for certain benefits that were expanded during the pandemic to provide extra assistance to families.

“They were a real big help. If they could do it again, I’d appreciate it,” McClish-Calimee said jokingly.

They aren’t the only ones who benefited from the federal and state government’s pandemic measures.

“Black working-class families remained in the worst overall economic position. As a result, many Black families entered the COVID-19 pandemic in a state of financial precarity,” an article by Duke University said of one study.

But while the pandemic wrought havoc on many families’ finances and many people lost jobs, researchers now are seeing that the government response to the pandemic actually decreased poverty in 2020, according to the Supplemental Poverty Measure.

“What was really different about the pandemic was some major actions that the federal and state governments took,” said Caroline Danielson, policy director and senior fellow at the Public Policy Institute of California, which helps collaborate on the California Poverty Measure.

She pointed to a host of aid, such as the Golden State grants distributed to people getting CalWORKS benefits, supplemental Social Security income that went to elderly people and those with disabilities, increased CalFresh benefits and the expansion of the California earned income tax credit that allowed undocumented people to apply.

Federally, the expanded child tax credit was estimated to have a significant impact on helping families in poverty in California – particularly in Sacramento and particularly for Black families.

The expanded tax credit may have reduced poverty in the Sacramento area by 42%, and Black and Latino children benefited the most, analysis by PPIC found.

Before the pandemic, gaps between the average worker and Black workers slowly were starting to close. Danielson said that’s because the economy had been performing well for a sustained period.

“When the economy is good, we get fewer people in poverty. It happens more slowly than the economy improving because low-wage work tends to lag economic improvements,” Danielson said. “When the labor markets are really strong, then low-wage workers start to catch up. So they’re kind of the first to feel the brunt of a recession and then the last to feel the benefits of an expansion, historically.” 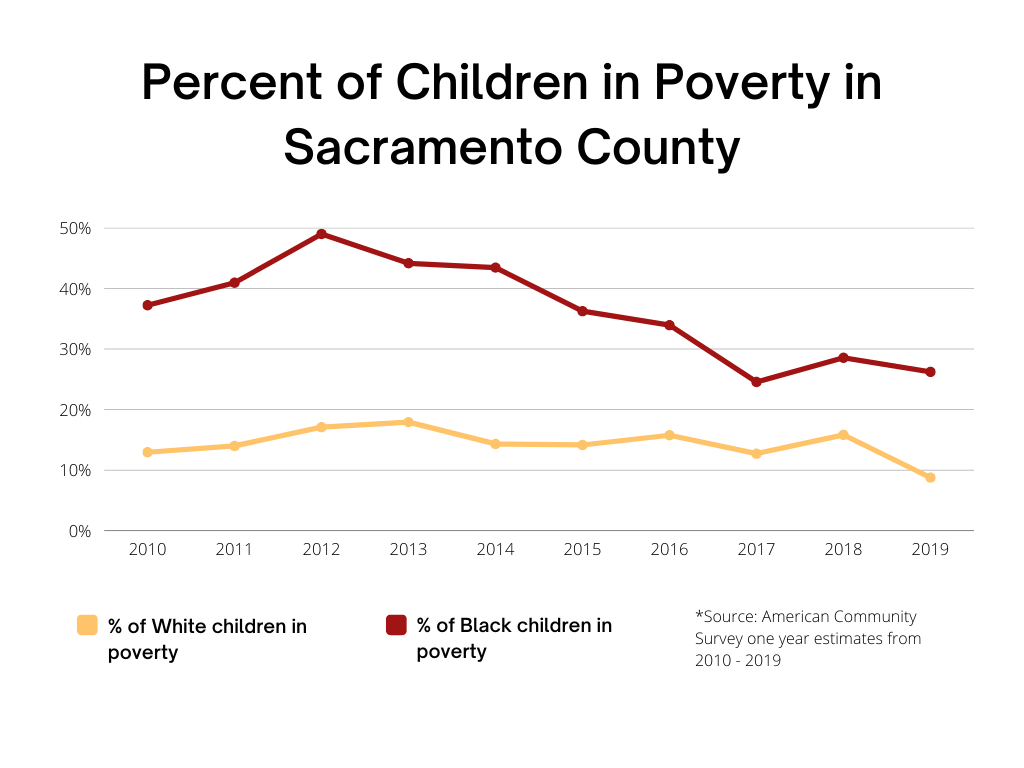 This trend is borne out in poverty data recorded by the American Community Survey. Since 2012, poverty for Black children has fallen significantly in Sacramento County. In 2012, according to Danielson, California still was recovering from the Great Recession, which officially ended in 2009.

The data show a lag in the benefit for low-income people through 2012, after which the poverty rate begins to drop, falling more significantly for Black children than their White counterparts, though it remains high.

The pandemic could have widened this gap again, but Sarah Bohn, an economist and senior policy analyst at PPIC, said early signs show that the gap between employed Black and White people is smaller than it was before COVID-19.

“That gap actually is smaller than it was pre-pandemic, so it kind of looked like signs of what people refer to as an ‘equitable recovery,’” Bohn said.

An equitable recovery would mean low-income groups wouldn’t see a lag in their recovery from recession as in the past. However, Bohn also emphasized that it’s too early to tell how all the chips will fall. Early signs give her reason to be optimistic, but they don’t tell the whole story.

The question now is whether government aid supported these families into 2021 and 2022. Many of the programs begun at the beginning of the pandemic have ended.

“Now, it is a really interesting question: what’s it going to look like when the poverty statistics come out? Because a lot of those programs had expired by 2021,” Danielson said. “Are we going to see increased poverty, even though we are coming out of the pandemic, and employment is rising?”

For McClish-Calimee and the children she cares for, the extra help is gone, but the rising costs that began during the pandemic have stayed. It means families like hers might actually be worse off now financially.

McClish-Calimee said if some of the benefits she got during the pandemic were extended, it would help a lot.

“That would really be awesome,” she said. “Because the majority of the money does go to bills, SMUD, rent, but then I have to buy clothes for the kids, shoes for the kids. And they’re growing girls.”

Danielson said researchers are looking at how effective different forms of aid during the pandemic were.

“One big question is whether they should have been or should be continued,” she said.

With 2021 and 2022 data not yet available, much remains to be learned about the pandemic’s effect on low-income families and people of color. But if the early findings hold, it seems the government may have an important tool in attacking poverty.

“If we as a society want to, we can actually really move the needle on poverty,” Danielson said. “Is that what we want to do, having seen that we can do it?”

EDITOR’S NOTE: Casey Murray is a Report For America Corp Member and a Data Reporter for The Sacramento OBSERVER.